The GIS-framework of GISus-M is ideally suited for calculating the LS factor using the LS-TOOL proposed by Zhang et al. (2013). As the LS-TOOL use ASCII DEM data to calculate LS-factor, we changed the source code to work with RASTER DEM data to be compatible with input data in GISus-M. A primary goal this step was to use methods widely applied and tested to calculate de topographic factor. 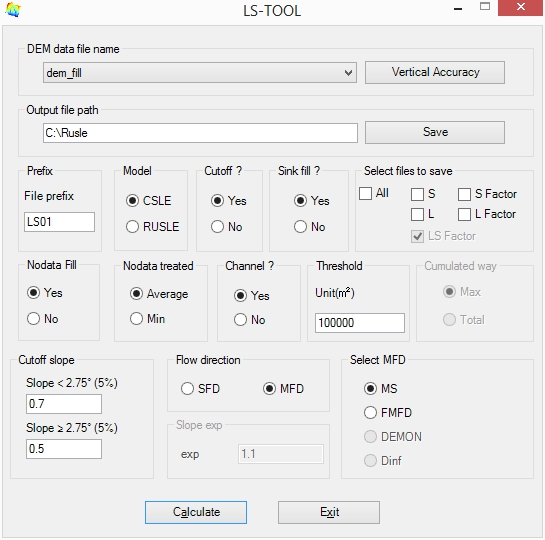 The calculation methodology of LS-factor is applied to each pixel in the DEM. Calculation of the L factor is expressed as (Desmet and Govers, 1996):

In order to do calculation of upslope contributing area (A_(ij-in)) each cell through flow routing, various algorithms has been developed in literature (O'Callaghan and Mark, 1984; Quinn et al., 1991; Tarboton, 1997). The LS-TOOLS application use the procedure for identifying channels suggested by Tarboton (1991). In LS-TOOLS, the exponent m of equation above was implemented according the algorithm proposed by McCool et al. (1989), where the slope length is a function of the erosion ratio of rill to interrill (β).

where β varies according to slope gradient (McCool et al., 1989). The β value is obtained by

The calculation of the S-factor proposed Wischmeier and Smith (1978) was modified in RUSLE model to obtain a better representation of the Slope Steepness factor, considering ratio of the rill and inter-rill erosion.

where  is the slope in degrees. The equations above are applicable to slopes higher than 4.572 meters (15ft), i.e. to DEM with resolution shorter than 4.572m, the following equation should be used to calculate S-factor (McCool et al. 1987):

It is important to note that the algorithm proposed by McCool et al, (1987) is used to slopes < 9% and another for slopes > 9%. Other approaches have been developed to calculate the S-factor on different slopes (Liu et al., 1994; Nearing, 1997).